Last weekend Cambridge University Handball Team travelled to Kent to participate in the second round of Uni Champs. The purpose of these matches was to determine which teams would be competing for the cup, plate and shield in the finals on the 2-3rd March. Read on to see how we fared and who we will be playing against in the next round!

The women’s first match of the day was a rematch against Bath, who we had lost to in the first round of Uni Champs with a score of 7-9. Bath maintained a minor lead for most of this low scoring game. The score was 8-6 to Bath with just minutes to go. A penalty scored by Bath was quickly followed by another penalty scored by Cambridge. Bath then scored another goal and the final result was 10-7 to Bath. The majority of Cambridge’s goals were penalties, with 5 out of 7 being attributed to them. The highest scorer was Cristina.

The next match of the day saw us play UCL. This was our third match against UCL this season, but the other two matches were friendly matches in which each team had won one. The time had come for us to play a proper match against UCL. Cambridge scored a quick succession of goals and secured a comfortable lead in the first half of the match. In an attempt to reduce our lead, one of their players went one on one on Georgia, Cambridge’s highest scorer. Whilst Georgia found it frustrating to be out of the action in attack, the tactic to fall back to the centre line opened up a large space in UCL’s defence. This allowed Cristina and Garazi to break through and score goals. The final result was 13-7 to Cambridge.

Our final match of the day was against AECC. After success in their previous two matches, we knew this would be a tough match. An injury to goalkeeper Nini meant Cristina took over in goal and we played the 30 minutes match with no subs. The tough competition brought out the best in us and good communication in defence, especially against their centre, left half and left wing meant only four goals were conceded when AECC broke through our defence. Throughout the match, AECC maintained a narrow lead before scoring several successive goals in the final minutes. The final score was 13-8 to AECC and the highest scorer was Georgia.

The women’s team have progressed into the National Cup tournament and will play in a group with Loughborough, Liverpool and the second team in Scotland.

Cambridge got off to a flying start against a Portsmouth team that came back from 5 goals down to draw 10-10 in the previous round. A solid defence and quick attack saw a 4-1 lead build up before a nasty injury to line player Chris. Despite Portsmouth mounting a comeback, goals from Basti and Erick (4 each) helped Cambridge to a 10-7 win.

The next game saw the team face a strong King’s college side. Cambridge again defended well and restricted their free scoring opponents to just 12 goals. Cambridge struggled against a physical defense and couldn’t manage to get the ball to the line player leading to a number of fast breaks for Kings. Basti top scored with 5 goals while Tom added 2.

The third game saw an intense end to end game against a strong Bath team which ended in a 17-17 draw with Bath scoring the equaliser in the last minute. Basti top scored with 6 while Toby and Tom identified the gaps in the Bath defense to score 4 and 3 each respectively.

Next up came Imperial and a return to winning ways with a comfortable 17-12 win which allowed Cambridge to rotate the bench and get some court time into the new players. Toby top scored with 5 while Basti added 4 and Erick 3.

The final game saw a physical match against a UCL team which had beaten Cambridge in two friendlies in the previous months. Cambridge again showed their defensive strength, with goalkeeper Jeremi on fine form. The game finished with a 17-10 win. Erick top scored with 6 while Toby added 4. The team defended excellently while keeping their heads at the other end despite facing some questionable defending.

Overall a successful day with some excellent handball on show against some very good teams! Jeremi was excellent in goal as always. Everyone did well to recover despite being shaken from Chris’s nasty injury early on.

The men’s team have also progressed into the National Cup tournament and will play in a group with Nottingham, Manchester and the first team in Scotland. 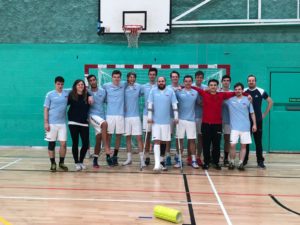